Back in April, model and actress Emily Ratajkowski famously told The Tonight Show‘s audience how she accepted a paper clip engagement ring from beau Sebastian Bear-McClard when he popped the question at the Minetta Tavern in New York City. 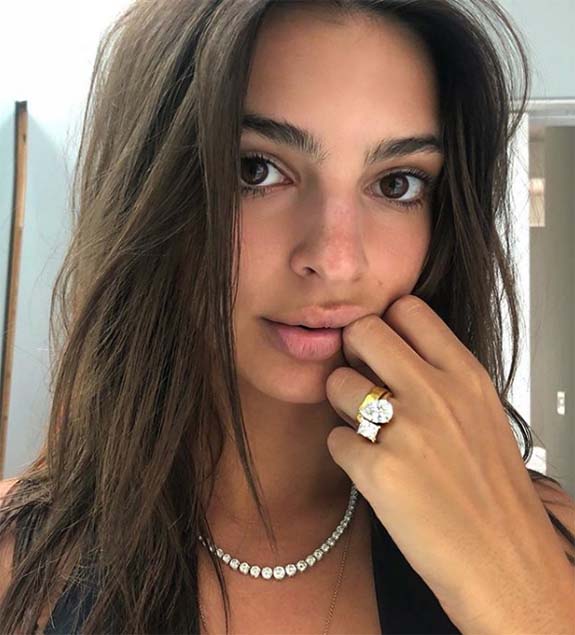 “He didn’t have a ring, so I was like, ‘Hmmm, nah,'” Ratajkowski explained to host Jimmy Fallon. “And then he took the paper clip that the bill was paid with and made me a ring, which I actually thought was really romantic.” 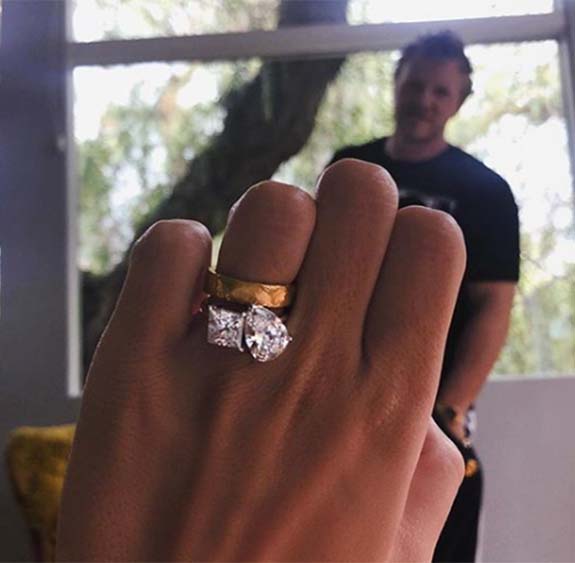 Now, five months after the proposal, the paper clip ring is history and top fashion publications are gushing over the model’s double-stone engagement ring stunner — pear-shaped and princess-cut diamonds nestled side by side on a simple yellow-gold band.

Both Ratajkowski and Bear-McClard took an active role in the engagement ring’s design. Vogue.com reported that the end result was a labor of love, as the couple worked on more than 50 sketches before agreeing on the final look.

“We liked the idea of two stones instead of one and spent a long time looking at rings with multiple stones for inspiration,” Ratajkowski told Vogue.com. “At one point it included a ruby as the second stone, [but] ultimately we loved the idea of the femininity of the pear contrasted with the architecture of the princess.

Last week, Ratajkowski treated her 18.5 million Instagram followers to a few closeup shots of the ring.

One can see in the Instagram pic that the dainty yellow-gold band of the engagement ring stands in sharp contrast to the wide yellow-gold wedding band.

On The Tonight Show, Ratajkowski recounted how she and her fiancé were looking to get married at City Hall soon after the proposal and had little time to pick out wedding bands.

Here’s how she described what happened next…

“So then we walked into Chinatown and bought an ounce of gold, and he was like, ‘We’ll melt down the gold and make the rings.’

“So I was like, ‘I just don’t see us melting down gold, like that just seems kind of difficult,’ but then he ended up going to some store in Midtown and met this nice man— this is the night before our wedding, by the way— and this very nice Israeli man was like, ‘I know how to do that.’

“So we came into his studio after hours and then we actually hammered them out, the whole thing, used a little blow torch. And they were supposed to be temporary rings, but now I’m very attached and I really don’t want to get rid of it.”

Looks like Ratajkowski kept her word. The on-the-fly, hammered-out wedding band is now part of her bridal-jewelry ensemble.